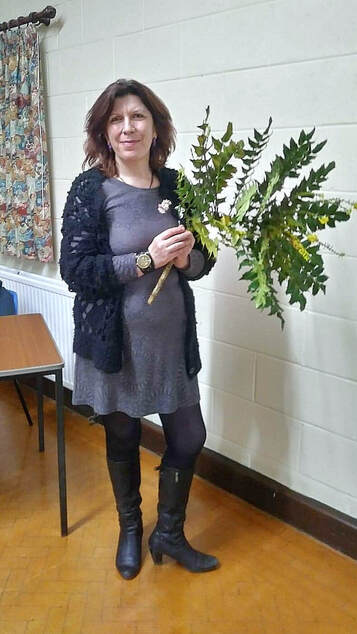 We were delighted that despite yet more rain and poor conditions our guest speaker Gail Plant arrived full of cheer and with a wonderful selection of fragrant winter flowers from herbaceous plants and shrubs. Gail talked about each one and shared samples amongst the audience.  We were not only able to admire the look and smell of the plants but also hear how the smell was described by the experts - honey, violets, lemon, rosemary.   As each persons sense of smell differs there were both positive and negative reactions around the room.   Gail designs gardens with a particular interest in scented plants and winter is a season of particular interest for her. 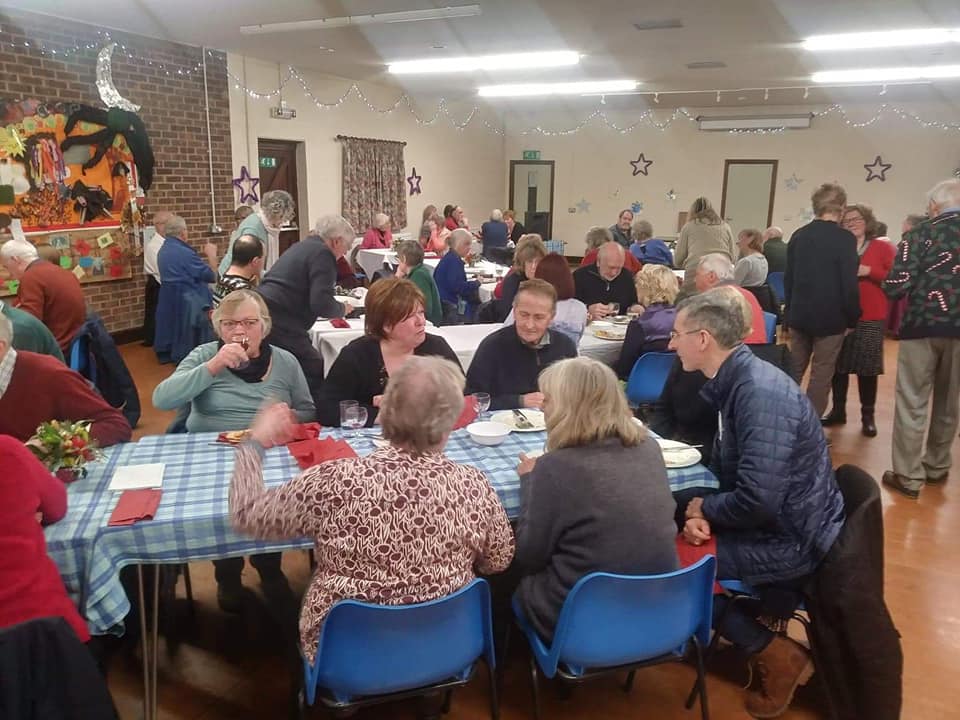 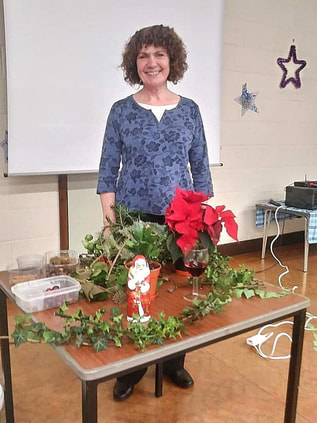 The Alderton Gardening Club's annual Christmas gathering was attended this year by over 70 people. We also had the added extra of a guest speaker, Julie Henderson who came from Bristol. She gave us a fascinating talk on "The 12 plants of Christmas".  Superb food was provided by our Julie Alvis and Liz Sissons, with caterers extraordinaire John & Sue Marfell doing us proud as well. Wine flowed by the gallon full. A bumper 11 prize raffle was organised by Laura Dansie, with free Holly and Mistletoe by the wheelbarrow load. There was a fantastic atmosphere in the village Hall with everyone enjoying themselves in true Christmas festive fashion. We finish 2019 with 96 members on the books, an average attendance of 65 people per meeting, two trips already organised for 2020 and a full programme of speakers booked! As Chairman I'm thrilled with this year's progress, but none of this would be possible without the help and support from our Committee, so thank you all and let's keep it going!!.. 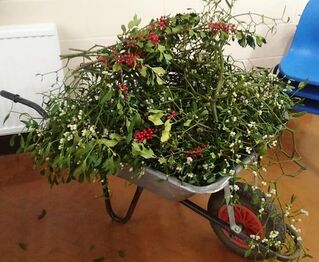 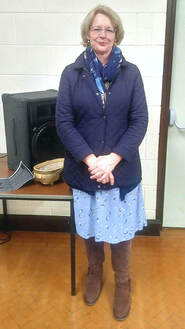 This was an engaging and informative talk. Fiona took us back to 1942 and interviewed members of the audience about their suitability to enrol in the land army. She described the multiplicity of their daily tasks, and the clothing provided for the work. Sharing the memoirs from several land girls  showed how proud they were to have done their bit for King & Country.

​Every aspect of this crucial work on the home front was covered; from the work of  lumber Jill's to the 24 hour shifts managed by the women driving and maintaining the tractors clearing and ploughing the land. The session finished with the audience singing with Fiona a women's land army song. All in all a real fun evening, with the longest round of applause yet heard for a speaker at a club meeting! Fiona does another talk entitled Dig for Victory, so we will inviting her back to Alderton again.

With a wealth of knowledge and a range of original photographs we indulged in the plentiful season and were encouraged to plan for the future.  Tips included a Facebook page about hydrangea's (HydrangeaHappiness) ,  sowing fresh seeds from Larkspurs and late flowering annuals and noting down good combinations to attempt to repeat them next year!

Terry visited Alderton Allotments during a balmy afternoon and met some local gardeners.  Tom, our Chairman, showed him round and Mr and Mrs Walton enjoyed tea at the Gardeners Arms before Terry's talk at the village hall.   The village hall was packed with over 100 people and the buzz of talk could be heard through the open windows as gardening club members and guests approached the building.  We were well entertained by Terry's professional talk and anecdotes and the evening finished off with a book signing.    Thank you to all who helped the Gardening Club with this event:  the allotment holders, The Gardeners Arms and Corner Cottage B&B.

A beautiful day dawned and 38 members were smoothly transported to Hestercombe near Taunton.   The varied from a Georgian landscape with ponds, woodland paths and arbours to the formal gardens of Gertrude Jekyll framed by architecture by Sir Edwin Lutyens.  The nursery was particularly appreciated and many boxes of plants found their way to the coach for the trip home.  Our Chairman was seen taking at least two armfuls of flowers - where does he put them all?    Tom has some lovely photos on his Facebook site:  here are a sample.

George Alway talked with warmth and humour about his (and his nieces) allotment experiences. He discussed the trials and tribulations of taking over a neglected allotment and the benefits of weed suppressant for new and experienced gardeners.  He was generous with his hints and tips, in particular using deep root trainers for a variety of seeds in addition to sweet peas.

The Brooks Gardens - an evening with Marion Stainton

Mervyn Reed visited to tell us how David Austin Roses began, look at how they breed their new varieties and review the last 2 years releases.  It was amazing to hear that in order to breed these roses over 50,000 roses are hand pollinated and labelled each year. From 250,000 seedlings growth and trials result in only 6 new varieties in 10 years time.  In addition to the development of garden roses trials are now being made of cut roses, to see how they last and unfurl.
David Austin use no pesticides for whitefly, just netting and sticky tabs in the greenhouses and the services of nature in the fields.
Growers transfer buds to root stocks to create the commercial scale of roses required for mass production and sale, a process still done by hand with skill and dedication. Three years later up to 200,000 of these roses are lifted, and prepared for dispatch by post in temperature controlled sheds by this successful business. 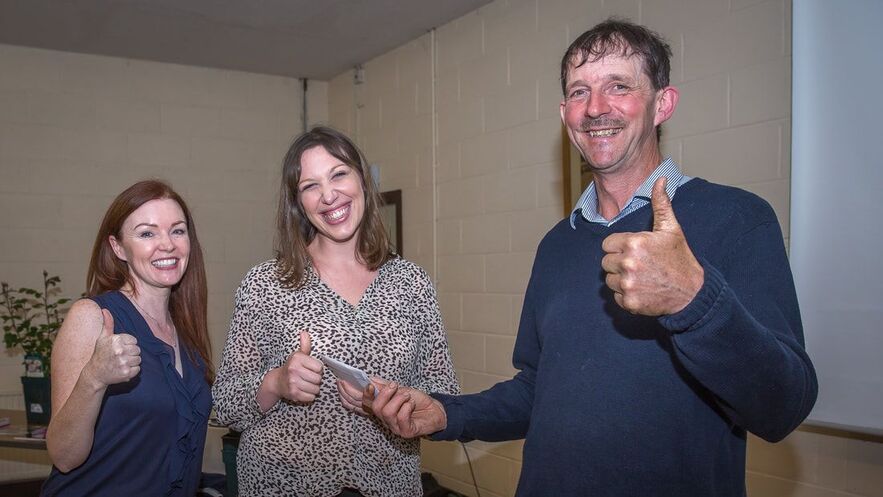 Tom Cullimore presenting local school parents Amy and Therese with a £100 gardening voucher to support activities at the school. 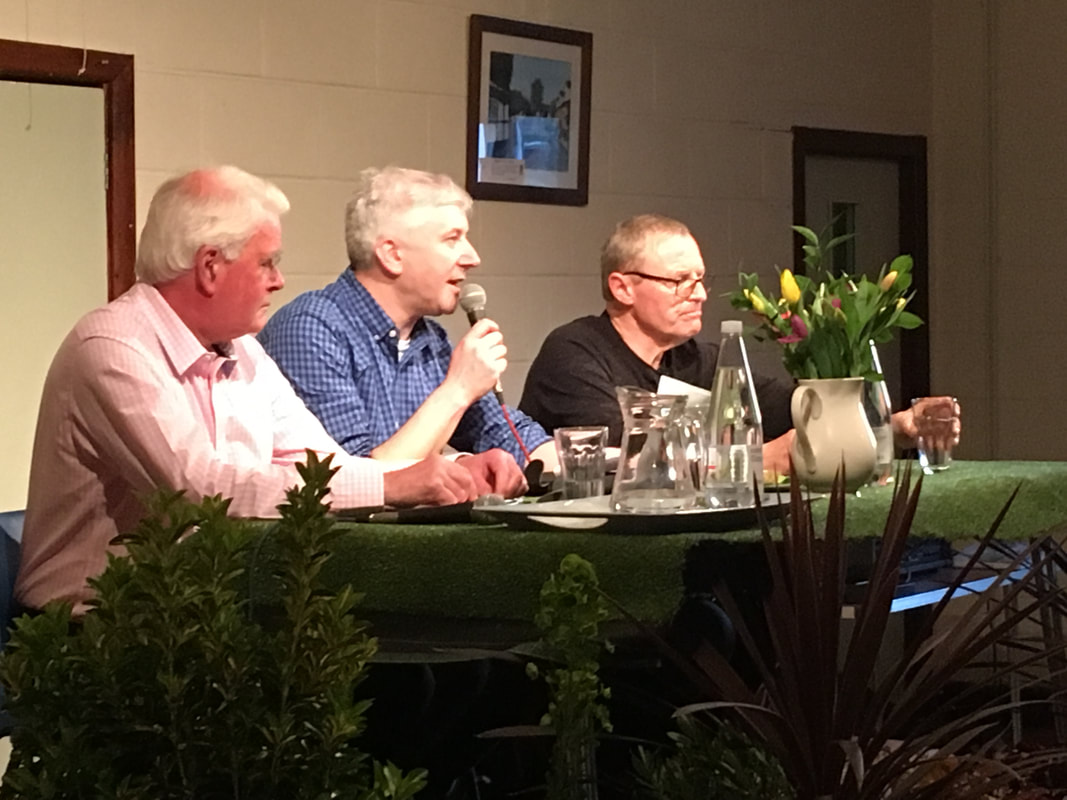 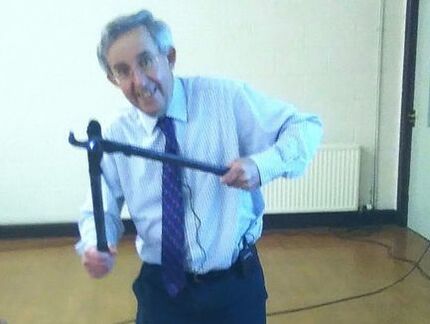 ​Duncan Coombs was a Pershore Horticultural College lecturer from 1983 and is a passionate plantsman, plant hunter and adviser to the RHS.

He proved an entertaining and popular speaker dealing with a variety of questions about how and when to prune a large range of shrubs.

​David Cramp is Chairman of the Gloucestershire Local Group of the RSPB and for five years until October 2018 a member of the RSPB Council. David shared images of the creatures found in his Alderton garden, local roads and on his allotment. His local and wider knowledge was invaluable in discussing how to make our village and gardens better homes for wildlife by embracing slugs, snails and bugs and even ants as part of our ecology. Moss in lawns can be used for nest material and ants nests provide useful food for woodpeckers. David encouraged everyone to plant more herbs to support the insects that we rely on, and even to tolerate the odd nettle patch to encourage butterflies.

Julie Ritchie is the proprietor of Hoo House Nursery (hoohouse.co.uk)  and has been growing and propagating plants using peat-free compost for many years.  She maintains around 900 varieties of perennials and illustrated her talk with colourful perennials and discussed how old and new varieties suited our clay soil and can enhance your garden throughout the year. ​

On Thursday 8th November we learnt about mistletoe.  Dr Michael Jones expert knowledge was shared in an entertaining and informative way as he discussed the facts, myths and legends that surround this fascinating parasitic plant.  Our local area has an abundance of mistletoe possibly linked to the historic apple orchards  - a favourite host of the plant.  Although we learnt that the UK is on the edge of the range of European mistletoe, which needs a summer temperature of 16 degrees Celsius, there are over 1000 varieties of this plant.   Michael's travels had taken him to Europe and Africa to study varieties of the tropical mistletoe and to churches and towns across the UK to study stories about this plant.  Tenbury Wells celebrates a mistletoe fair and the 1st December is mistletoe day - let's all celebrate this fantastic plant.

​Thursday 11th October - Roger Umpelby - Bugs: the good, the bad and the ugly

​Roger entertained us with a fascinating look at the bugs in our gardens.  These invertebrates, mainly sucking creatures, included ladybirds, scorpion flys, wasps , beetles, aphids and many more.  Illustrated with some wonderful close up photographs, some of which Roger has kindly shared with us below, we learnt about the positive role of wasps, hoverfly and lacewing larvae in controlling aphids.  The range of tiny predators and the brutal world where bug eats bug was eye opening. Encouraging a variety of insects to a range of plants in the garden benefits all wildlife - so even if your fushias are getting eaten remember that it's the Elephant Hawk Moth Caterpillar that is being fed to develop into a beauty later.

On Thursday 13th September Mandy Bradshaw  provided a professional and entertaining talk despite having recently broken her arm!  She gave the group an excellent picture of the range of private gardens that are a hidden treasure in the Cotswolds - often only open on selected occasions.  Mandy also writes for newspapers and our local magazines and illustrated her talk with some excellent photographs.

​On Thursday 9th August Marion Stainton gave a talk  - For the Love of Blue Poppies  -  What have the Himalayas ever done for us?  She told a fascinating tale of plant collectors in the Himalayas and the historical introduction of many very garden plants and the influence they had on styles in gardens at the time. We heard about the challenges that collectors had in those times, including being covered with leeches, and the astounding number of plants that died and were lost due to long sea journeys and lack of knowledge about the plants' requirements.  Over 200 species of primulas and over 4000 species of rhododendrons originated in the Himalayas. An informative and well presented talk it reminds us of the international nature of many of our own gardens.

Fourteen Alderton Garden Club members made the trip to Morton Hall Gardens on Tuesday 17th July.  We were relieved that the weather was cloudy and noticed a cooling breeze as this late 18th century manor house is perched atop an escarpment with breathtaking views over the Vale of Evesham.
​
We were treated to an informative talk by Anne Olivieri and the Head Gardener. The Stroll Garden, the South Garden and the Vegetable garden - which contained as many flowers were full of interest.  The novel use of clematis within the mixed flower borders through using special supports between the roses was a particularly attractive feature.   We learnt that the beautiful grounds also have a magnificent display of spring Fritillaries and over five hundred tulips, tempting members to a repeat visit. 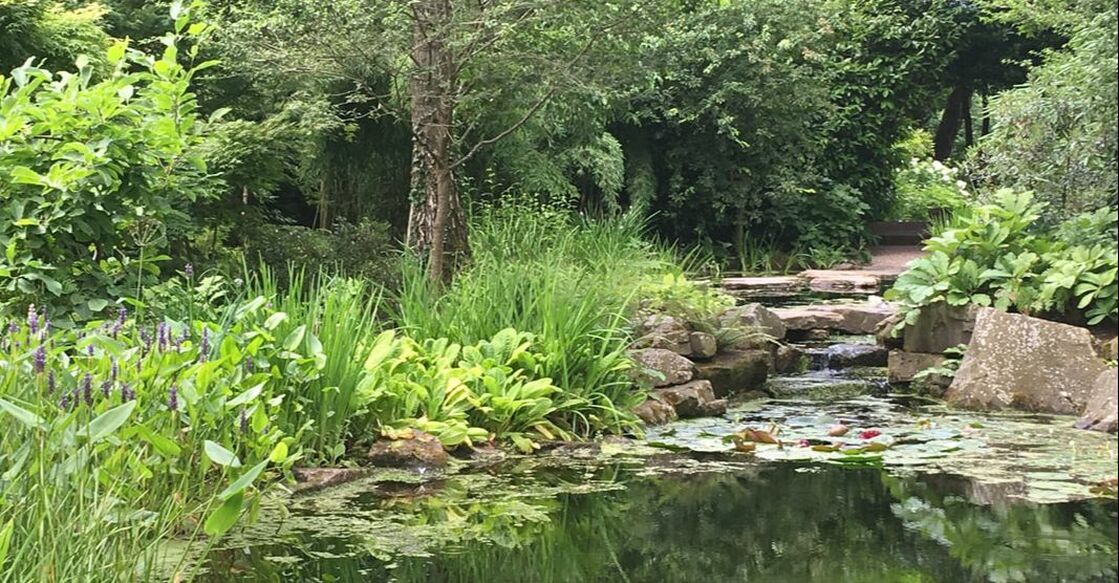 Andy has had a long career as a nurseryman and was trained at Pershore College.  His range of shrubs, climbers and perennials proved popular and one lucky audience member received an unexpected free gift.
​

On the 10th May Frank Hardy provided an entertaining and creative evening discussing focal points in the garden. Frank brought with him an array of shrubs and perennials and got the audience to really look at shapes, colours, textures, shadows and viewpoints.  He established some basic principles such as thinking about evergreens for 50% of the border then thinking about colour.  The audience were challenged to pick a 'star plant' and then Frank went on to build a border layout from the assortment of shrubs in the room.  It was fascinating to see how he created order and complementary planting from the apparently random mix of shrubs available.

An evening with Reg Moule proved a popular launch for Alderton Gardening Club and attracted an audience of over 60 people. With more than 50 new members the club looks forward to a successful year. Reg entertained the audience with a talk that ranged from organic compost to lawn care and added some detail to our knowledge about the chemical composition of different fertilisers and when they are best used.